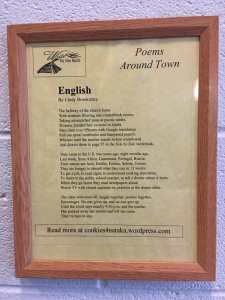 I love my writer friends from Virginia – magazine editor Katharine Gotthardt; documentary filmmaker Victor Rook; nurse Jan Rayl, whose guest-post, “Always Wear Clean Underwear,” remains one of the most-read pieces on my blog. All are members of Write by the Rails, the Prince William Chapter of the Virginia Writer’s Club.

Their latest literary activism is “Poems Around Town,” an area-wide poetry installation in Prince William County. The initiative encourages everyday people to come upon a poem unexpectedly, and stop and read something they might otherwise not glance at – something that will get them thinking in a different way.

I am thrilled they installed my poem, “English,” in the Manassas Park Community Center. I wrote it in 2014, after observing an English as a Second Language class as part of grant-writing for a non-profit (and before I moved to North Carolina). I was so humbled by the people gathering to learn to a new language – something I have been unable to master.

Simply sending your writing, in whatever form, out into the community and knowing that others can read it is thrilling. I’m following a long-rooted tradition that includes Betty Smith (“A Tree Grows in Brooklyn”) selling her one-act plays for grocery money. Or George Moses Horton, the black farmer who taught himself to read and sold his original love poems at a Chapel Hill farmers market. When you are compelled to write, you just do it, and fling it out to the four winds when you can.

So another place my work may show up is on a scroll in a coffee shop in Goldsboro, North Carolina. 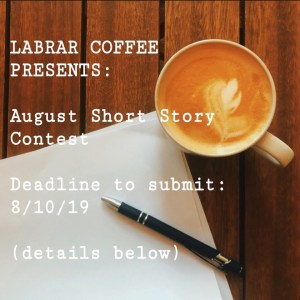 Labrar Coffee, owned by newlyweds Sergio and Carmela Sanchez, is a tiny shop on Center Street in Goldsboro. In August, Sergio, who is a writer and loves to support fellow writers, came up with a Short Story Contest with three rules – 1) 3,000 characters max, 2) must be your own work, 3) contains no profanity. A panel reviewed submissions by applicants of all ages and picked the top five. For the remainder of the month, customers can read the five stories on scrolls while they wait for their drinks, and vote on their favorite piece. At the end of August, Labrar will announce a winner, with a gift card as the prize — and perhaps other goodies.

I’m planning a trek to Goldsboro over in Wayne County to check out the scrolls this week and see if my submission made it to the top five. The story I submitted is “The Oyster House,” about a child’s visit to his grandmother’s house in Eclipse, Virginia. If it didn’t make it, no fear – Labrar plans to repeat the contest again in the future – I’m sure I’ll submit something else.

I just love these activist ideas for bringing local poems and short stories out where everyday people can read them – and be inspired or provoked to think in a new way — as they arrive for their workout or stop to buy a cup of coffee. I love that local poets and writers are being read in their communities — so much better than picking up dog-eared issues of national tabloids.

For more information on Write by the Rails’ Poems around Town poetry installation, go to https://wbtr.org/poems-around-town/

For more information on Labrar Coffee’s Short Story Contest on scrolls, go to their Facebook page at https://www.facebook.com/Labrarcoffeecompany/

2 thoughts on “Poems in everyday places”