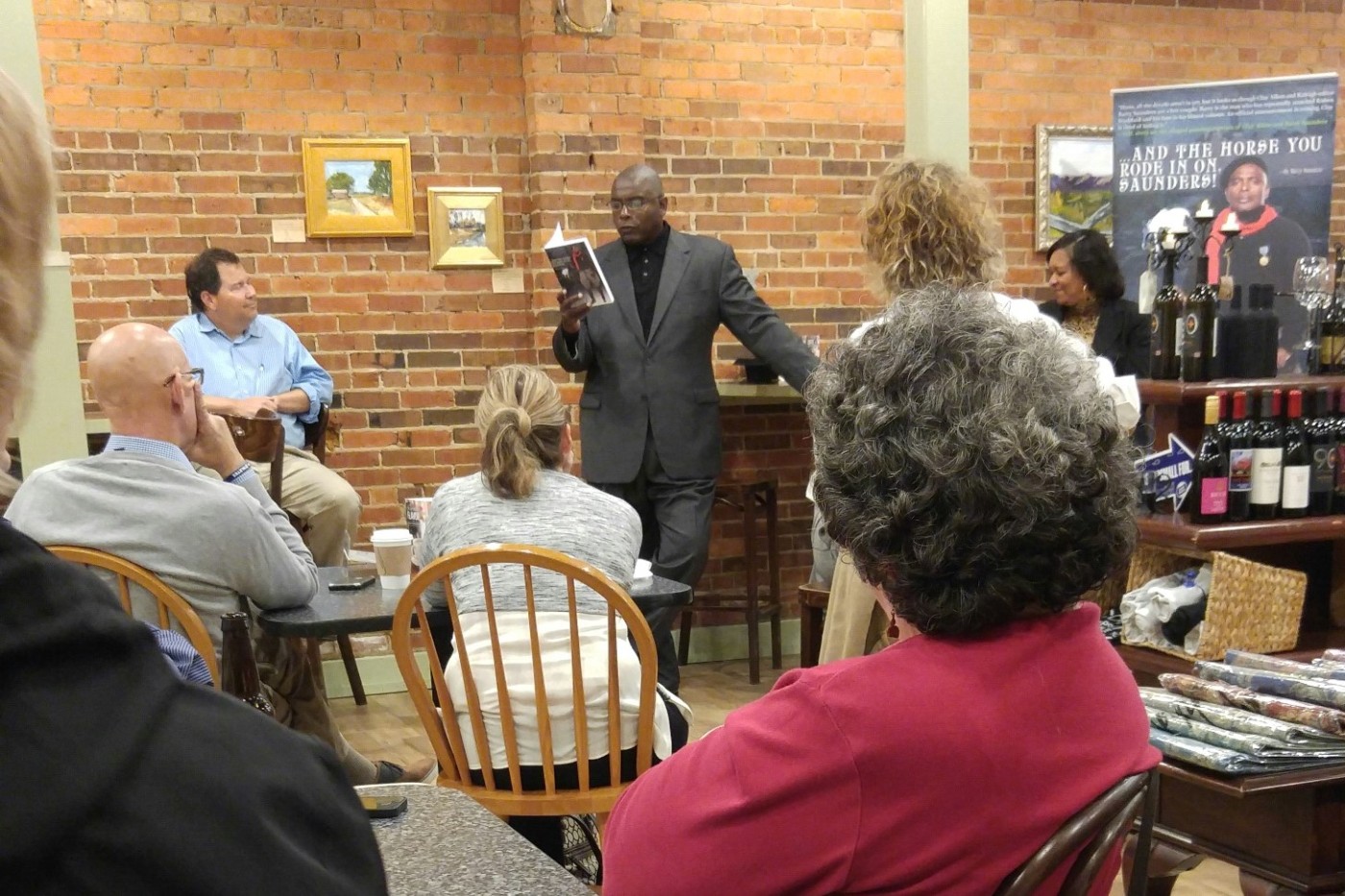 Saunders was there to discuss his book, …And the Horse You Rode in On, Saunders! The book is a compilation of his columns from 1995-2005.

We joined the gathering crowd and listened as Saunders spun stories and shared the humor and honesty of 23 years of toiling in newsrooms. The biggest surprise? He loves it when people criticize his columns. If he’s not being challenged, he doesn’t think he’s doing his job. He knows he has a tough audience to please, and works hard not to be predictable.

I started reading Saunders when I moved to Pine Level two years ago. His columns were a window on my new environs, where some locals called me “Miss Cindy” or “Suge” while others were taking a raised-fist stand on HB2, voting rights, eminent domain. All his subjects were relevant in my little corner.

The Saunders column that cemented my subscription to the N&O was “Writing Salvaged My Life,” (February 8, 2015). His subject was Shelby Stephenson, who grew up on a farm in Benson and was, at the time, being installed as North Carolina Poet Laureate. After reading an earlier column (Saunders: “If it weren’t for my danged deadline, I’d still gladly be listening to Shelby Stephenson’s stories.”) I drove to Raleigh to witness the installation myself. I can’t tell you how thrilling it was to stand under the state capitol dome, in a chamber filled with educators and literary hall of famers and see a humble writer so honored.

Saunders wrote: “Stephenson said he sometimes reads publicly, often with other noted Tar Heel poets as Jaki Shelton Green. ‘She’s always getting on me for writing about possums,’ he said, laughing at the gentle rebukes. ‘I’ve written two books about possums. We ate so many of them growing up that I try to give back to the possum community.’”

He also quoted Stephenson: “Creativity is in each of us. It’s not something just a few people have.”

Saunders made me realize how accessible Stephenson is. So I asked the laureate to speak to our writers group in Selma, which he did. Stephenson also traveled to my former hometown of Manassas, Virginia, where he participated in a poetry event, “In the Company of Laureates,” at the Hylton Performing Arts Center that involved five state poets laureate and others, which a fellow writer, June Forte, arranged in October 2015.

Tuesday night, Saunders shared with the gathering at Grapes & Grounds about growing up in Rockingham, N.C. and his college days at Morehouse. His first newspaper job at The Atlanta Constitution, was writing obituaries. He said he learned the hard way, that spelling names correctly is vital, “because some people only get their name in the paper twice, when they are born and when they die.” He is still haunted by a hurriedly typed “Rhett” that should have been “Ray.”

Saunders shared that in 23 years of writing columns, he’s had to apologize and “eat crow” about 10 times. He said people respect you when you admit your mistake. And his favorite columns are the ones that produce positive action, like helping an ex-felon find a job or a teenager getting much-needed shoes. His worst column? Well, the title of his book is the tail end of a curse one reader hurled at him after publication of a particularly trouble-stirring one. Saunders joyfully admits his book would make a great holiday gift for friends and enemies alike.

Copies of Saunders’ signed book are available at Grapes & Grounds, located next door to the Howell Theatre at 135 South Third Street in Smithfield, N.C.

If you’d like to meet with other local writers, the Johnston County Writers Group meets the second Thursday of the month at 6:30 pm at the Selma Public Library, 301 N. Pollock Street in Selma. Our next meeting is Dec. 8, 2016.