When my friend Barbara Presnell invited me to The North Carolina Writers Conference on July 29-30 in Greensboro, I didn’t want to go. I was still wallowing in rejections. How could I hold my head up among an assembly of the state’s leading writers, editors, publishers, educators and literary professionals?

I forced myself to go, and all it took was a few conversations in the lobby to realize the struggle for acceptance and valid pay for valid work never ends, even among those accomplished writers with a vast body of work.

Observing the sessions was like running my fingers over a bas relief of “the writingest state.” I heard from those working to document the legacy (North Carolina Literary Map), showcasing the latest work of outstanding writers (magazines like Our State, Pinestraw, Salt and O Henry, and online journals like storySouth) and bringing writers out of isolation to write in community (North Carolina Writers Network). I also heard about the gaps that need more work. For example, a panel of Andrea Selch, Kimberly Becker and Krista Bremer spoke of their personal experiences in confronting discrimination due to sexual orientation, ethnicity and religion. Moderator Jaki Shelton Green challenged the gathering to “bring diversity to the room” by next year’s meeting in Rocky Mount in July 2017.

Even now, I can’t stop thinking about young Andrew Saulter of Unicorn Press, demonstrating how he can sit at a table in a coffee shop and mak

e books by opening his metal artist’s box and drawing out a spool of linen thread, which he strings on a needle to weave through awl-poked holes of paper to hand-bind a chapbook of poetry. He does this, book by single book, until a stack of 400 are ready to sell. Looking at his simple tools – etching knife, steel ruler, bone folder, glue brush – made me more determined to return to Pine Level and be someone who ekes out a piece of literary landscape here.

That evening, amid testimonials and red velvet cake, Poet Betty Adcock was honored by her peers. The speakers – Jim Clark, Noel Crook, Al Maginnes – pointed out that for someone who never earned a college degree, she managed to garner major literary prizes

and fellowships (including the Guggenheim), and mentor generations of rising writers as a resident writer, faculty member and visiting professor. Katherine Stripling Byer shared literary gossip, sidestepping a skinny dipping incident until Adcock brought it up herself. Noel helped her read her latest poem, soon to be in her seventh collection. Past honorees Ann Deagon, Ruth Moose and Bland Simpson were among those present; Adcock’s name joins a distinguished roster of honorees that includes Paul Green, Doris Betts, Reynolds Price, Fred Chappell, Shelby Stephenson and Margaret Maron.

I gleaned the book tables for take-home treasures, settling on Malaika King Albrecht’s Lessons In Forgetting, Jo Maeder’s When I Married My Mother and Good Country People: An Irregular Journal of The Cultures of Eastern North Carolina from the famous R.A. Fountain General Store. I also picked up an Anti-HB2 bumper sticker from Literary Lantern Press. (This ridiculous anti-tourism measure confronts me every time I volunteer at the Selma Visitor Center and have to tell a timid traveler, “yes, it’s okay to use the restrooms.”) 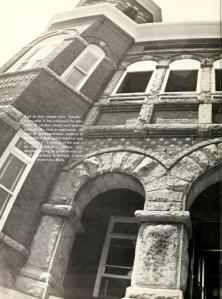 My best memory of the conference will be sneaking away to visit the UNC-G campus with Barbara, 40 years after we graduated. We found our dorms, the Quad, nearby Yum-Yum’s. The Holy Grail was the Presby House where we both took Fiction Writing 101 with Lloyd Kropp, and after graduation, where Barbara was married to her husband of almost 36 years, Bill Keesler. We skirted one-ways and dead ends to find it, a squat 1960s building dwarfed by high rises; now labeled the Graduate Welcome Center. We parked and walked the perimeter. “This is it,” she said. “This is where my wedding picture was taken.” We walked up the steps and cupped our hands against the window. There was the fireplace. There was a similar circle of chairs.

Jean hung up the pay phone in the dimly lit hall. The weight of her body wanted to pull her through the warped tile floor. “Papa’s dead,” she said, half to herself, and half to Mrs. Hobgood, her landlady, who stood in the doorway, clutching a blue chemise robe to her breasts.

Forty-plus years, and the anxiety of a 19-year-old, reading her work aloud for the first time burned the opening paragraph in my brain.

Now I’m back in Pine Level, toiling away at my computer as I have always done, published or not. I’ve marked my calendar for Sept. 18, when Barbara launches her latest book of poetry, Blue Star (Press 53, 2016), at the Lexington Public Library. I plan to be there, as she has been there for me, even when I whine and complain about not being published.

“I think you are doing the work you are supposed to do! That’s my new philosophy,” she said.

Thank you, Barbara, for inviting me to The North Carolina Writers Conference.

5 thoughts on “On Being a Literary Citizen”